The reference design for a 6-claw robot using NuMicro M0518 series can be used in teaching, scientific research, entertainment and a variety of contests. This 6-claw robot has a total of six claws with 3 joints respectively to provide 18 action modes including moving forward, backward, left and right, rotating, dancing and so on. A clamp holder is provided in front of the robot to open, close and catch objects.

The M0518 series features 24-channel PWM in which the 20-channel PWM is used to control the robot actions and the 4-channel PWM can be used to achieve other functions. Specifically, the 2-PWM is used for distance detection by sending and capturing infrared signals. When there is an obstacle in front of the robot, the robot will reflect the issued infrared signals and then confirm if the coding of the issued signal captured by PWM is consistent to determine if there are obstacles ahead; if there are obstacles, make the robot back to avoid hitting.

The other 2-channel PWM is used for controlling LED and buzzer. The LED luminance can be adjusted by controlling PWM duty ratio. The PWM output frequency can control the audio frequency in buzzer to have sound with different frequencies.

In addition, the reference design has the battery level detection function, which measures battery voltage through ADC to achieve power detection. When the ADC output voltage is lower than the lower limit of detection, the buzzer will buzz to alert the level is too low.

In terms of communications with robots, UART can be connected with a Bluetooth module for remote control of the robots. After completion of Bluetooth pairing, the six-claw robot can be operated using the APP on smart phones or tablets. 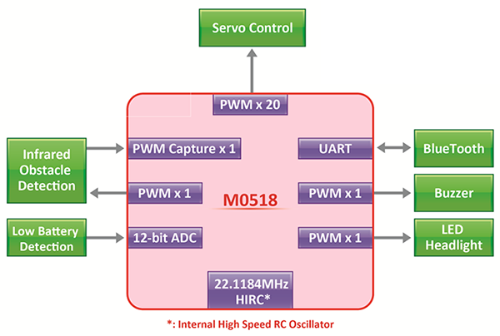 Be a hidden champion in providing sustainable semiconductors to enrich human life.